Yesterday, I had the privilege of going to the Philadelphia Auto Show with my friend Larren. Christine, his girlfriend (also the one who dyed my hair), had work and was not able to go, so they asked me if I wanted to go. I said sure! I had never been to an auto show like this before (old cars, yes. New cars, no), so I was really looking forward to it. Lucky for me, they had quite a few old cars in an exhibit there, too, which made me even happier.


The auto show was at the Pennsylvania Convention Center in Philly. I was pretty surprised by the size of show. We entered at the Chevy display, and I was immediately disappointed by the 2013 Chevy Impala model they're coming out with. I much prefer the 2010, '11, and '12 models.

Ford had some really cool displays, and a preview of the 2014 Fiesta. I, personally, am not a fan of Ford cars. Then again, if someone said to me "Hey, here's a free Ford!" you best believe I would drive that thing.

I took pictures mostly of the old cars, not the new ones... But they are on my camera, and I'm writing this via my iPod touch. An update on those later.

After Larren and I had seen pretty much everything there was to see, we left and walked through the Redding Terminal Market, which was just across the street. I had never been there before (okay, I had never been to any of the things we had done that day, but still), and it was pretty neat! It actually reminded me of a smaller, much more tightly compacted version of the Pennsauken Mart here in New Jersey that is no more. They moved it to Willingboro, and it's just not the same.

After that, we walked down the street a little further to the Hard Rock Cafe. I have always wanted to go there, so it was cool to finally be able to do so. The food was delicious. I had their turkey burger and a drink I can't remember what it was called, but you can see it below.

It was fruity and was topped off with Sierra Mist, as well as a strawberry, pineapple slice, and an orange slice. Yay for yummy, non-alcoholic drinks! The drink I got was one where you could take your glass home, so now I have a pretty glass. I hope to go to multiple HRC in different cities just to get another hurricane glass from them. (That or go to Starbucks' in major cities and get a coffee mug of their city!) 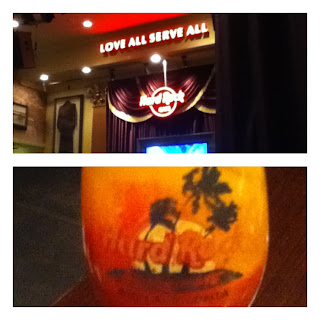 When we were done at Hard Rock, we walked through Chinatown a little bit to get back to our car, and then we were off home. All-in-all, it was a really good day and I had a lot of fun!

Tonight is a little more low key. Just making my chicken broccoli pasta dish. Perhaps I'll do a post on that next?

written with love by Unknown at 3:36 PM 2 comments: